CIW / Tourism / Bangkok is the most popular destination for Chinese tourists China ranks the first of the top ten sources of tourists to Asia pacific destinations with 50.4 million international overnight visitors; it is nearly 20 million more than that of South Korea which ranks the second according to a MasterCard research. 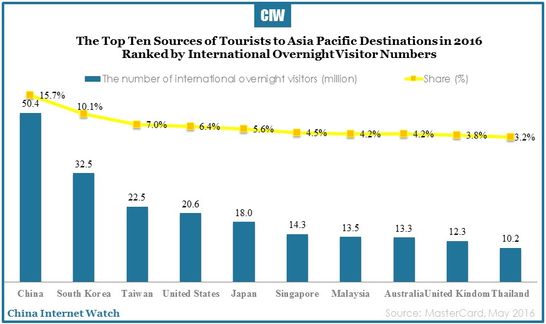 Of the top ten most popular Asia pacific destinations, Bangkok is the most popular destination for Chinese tourists with 8.2 million international overnight visitors, followed by Seoul (5.2 million), Tokyo (2.7 million), and Phuket (2.5 million). Of the top ten sources of tourists to Asia pacific destinations in 2016 ranked by total expenditure, China spends 45.3 million dollars in 2016, accounting for 18.2% of the total share; and, the total expenditure of China is slightly more than twice the sum of South Korea. By 2025, China’s investment in tourism will reach US$278.7 billion, taking over the US as the world’s largest tourism country; by 2025, China will surpass Spain and France to be the second largest country by tourism revenue and the most spending country.