iResearch recently released its China Internet Data Report in Q2 2013, giving us a glimpse of China internet performance in Q2.

As you can tell from the chart above, Mobile won over PC devices on internet segment markets growth, such as shopping, searching, marketing(searching excluded) and game. Online shopping and searching on mobile devices both had a YoY growth as high as 181%, out performed PC devices which only had 39% and 28.6% YoY growth. Online shopping was the driving power of E-Commerce, had the highest YoY growth rate of 45.3%. B2B was still the biggest part in E-Commerce, with 2 trillion yuan(324 billion USD) revenue in Q2 which was 80% of total E-Commerce revenue. 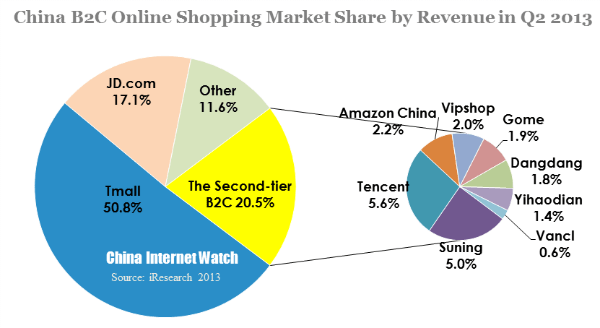 Chinese online shopping markets were led by Tmall with 50.8% market share and Jingdong with 17.1% share, the competition in the second-tier B2C enterprises were tense. Alipay occupied 49% of China third party payment market, followed by Tenpay with 20% and Unionpay with 10%? Alipay was the top app in China mobile third party payment with 66 million monthly users and 20.4% MoM increase rate. However, Bestpay, Lakala,cmpay and yeahka competed with each other fiercely in Q2 2013.